Thirty years ago, today, The Lost Boys launched in movie theatres across North America and, unbeknownst to me at the time, this seminal 1980s horror-comedy flick, with the hot-looking cast and snappy one-liners, would later influence the direction of my life – and my friendships over the next three decades. 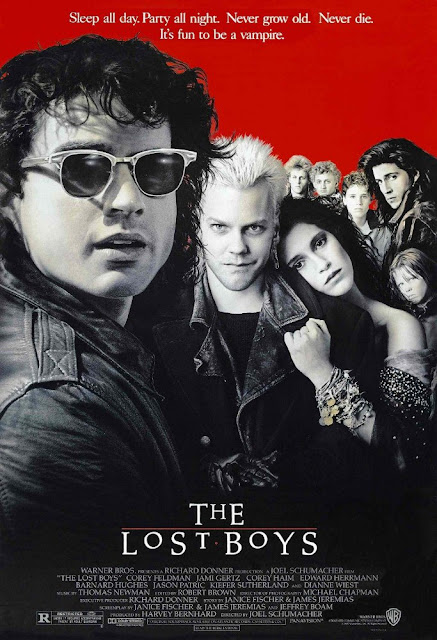 I’ve always been a huge fan of horror movies, and while I prefer my horror to be dead serious (The Omen, Rosemary’s Baby, Carrie, Poltergeist, The Shining etc.), I don’t mind checking out the occasional, more light-hearted fair. When The Lost Boys premiered on July 31st, 1987, it became a near instant box office smash and laid the foundation for many vampire-horror movies to come. Starring a sexy young cast of established actors and a few relative newcomers, the plot revolves around two teenage brothers, Michael and Sam, who move to Santa Carla, a fictional California beach town, dubbed the “Murder Capital of the World”, with their recently divorced mom, and soon find themselves the target of a charismatic but ultra-violent vampire coven. Michael (age 19), is unwittingly transformed into a blood-sucker, with 15 year-old brother, Sam, joining the Frog Brothers, two inept 15-16 year-old “professional vampire killers” in a desperate attempt to reverse Michael’s fate by destroying the Head Vampire and his entire immortal family.


Unlike other vampire movies, starring a suave and charming middle-aged-looking night-stalker (think Bela Lugosi and Christopher Lee), The Lost Boys vampires, David, Paul, Dwayne and Marko, were the essence of sexy, playful and mischievous youth, with cool clothes, nice hair and a badass, rock & roll attitude. I mean, just look at these guys. So yummy, n’est-ce pas? 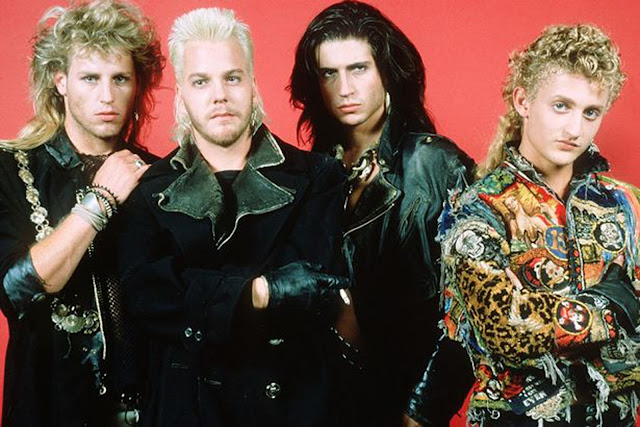 Anyway, I loved the movie so much, I bought it when it came out on VHS tape (remember those?) and watched it at least a dozen more times. I was 19 years-old in 1987, a professional nightclub dancer and model, with a strong interest in graphic design and creative writing. When it got to the point that I could quote every line in the movie, talking in unison with every actor, from the opening scene on the carousel to Grandpa’s final words before FADE TO BLACK-Roll End Credits, I got an idea. Why don’t I write myself into the movie? Create a new character and insert her into the film, making any necessary changes to the story to allow her/me to fit in, seamlessly, with the already established cast of characters. Just for fun. Just to see if I could do it.


Since I had zero knowledge of proper screenwriting format at the time, I chose to write it in novel manuscript form on an electric typewriter, which turned out to be a helluva lot more work than I was expecting (I’ve always been a slow and highly inaccurate two-finger pecker). I created backstories for all the vampires, who they were, how they became vampires and formed a coven before moving into that really cool cave, in Santa Carla.


Max, the Head Vampire (played by Edward Herrmann), was a physician in England when he was attacked by the vampire who transformed him into the bloodthirsty, immortal serial killer, Jack the Ripper. Investigating the Ripper murders was David, a rookie police officer for Scotland Yard. His 19 year-old little sister, Emily (that’s me), was a pretty smart cookie when it came to chemistry, biology and forensic science. She and David were very close and she helped him with his investigation into the serial murders, whenever she could. While tracking David’s progress in hunting him down, Max (the Ripper) became enamoured with Emily and decided to turn her into his vampire mate. Ah, but how to seduce her into becoming his loyal and compliant immortal bride? In a move that foreshadows events in The Lost Boys, Max attacked and transformed David. After days gone missing, David returned home to his beloved sister and convinced her to join him in immortality, with Max as their new Dark Father. She reluctantly agreed – only to regret it soon after her transformation when Max started putting the moves on her. It’s only when Max threatened to torture and kill her brother that Emily relented to his sexual advances, their contentious relationship easing, somewhat, as the decades passed and more people joined their twisted little family.


Sweet, cherubic Marko (Alex Winter) was 8 years-old when Emily pulled him from the ruins of the San Francisco earthquake, in 1906. Orphaned and badly injured, Emily convinced Max to let her nurse the helpless youth back to health, their mother-son bond growing over the years until Max decided to turn him into a vampire, at age 18. Lanky blonde, Paul (Brooke McCarter), was a career criminal on trial for the rape of a 12 year-old girl and the murder of her entire family, in 1942, when Max decided to turn him. The dark and delicious, Dwayne (Billy Wirth), was the infamous Zodiac serial killer whom Max sired, in 1971.


In 1977, Max, Emily and the boys moved to Santa Carla. Sleeping in a cave by day, hunting and killing the local denizens at night, Max had, by this time, lost all romantic interest in Emily. Much to her relief, in 1984, he moved into a quaint little beach house, got a dog (a vicious protector named Thorn) and opened a video store, appearing every inch the affable and charming local businessman to the unsuspecting public.


It’s now the summer of 1987, and Emily meets the new boy in town, Michael, at a music festival on the Santa Carla boardwalk. Their attraction to each other is undeniable, although Emily fears how David, who has an almost incestuous affection for his sister, might react to seeing the two of them together. 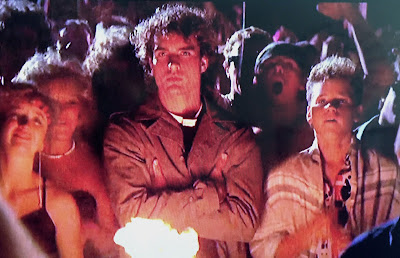 Michael and Emily lock eyes across the crowd.﻿


While David wants to kill the interloper, Max decides that Michael’s mom would make an excellent new immortal bride and mother to his wayward Lost Boys. He promptly orders David to befriend and trick him into drinking some vampire blood (in my story, there is no Star or Laddie). Michael joins his enigmatic new friends at a party in the cave, unknowingly drinks from a bottle of David’s blood and slowly begins his transformation, while Emily’s protests fall on deaf ears. 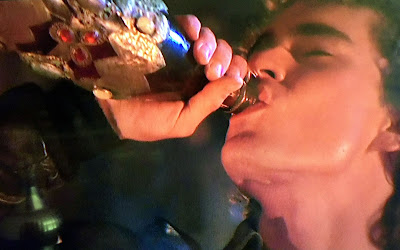 David: Drink some of this, Michael. Be one of us.﻿


Determined to see his plan through, Max abducts Emily and confines her to his beach house, with Thorn ordered to rip her to shreds if she tries to escape, so David can formally induct Michael into the world of the undead with his first kill and taste of human blood. 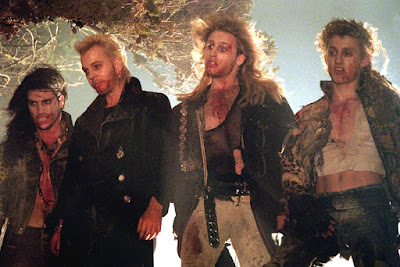 
Fortunately, Michael resists the urge to feed and returns home to his little brother, Sam, to develop a plan to destroy the vampire clan and free him from the curse. Completely fed up with life as an immortal, and deeply dismayed by what a century of random killing has done to her once sweet, sensitive and loving brother, Emily goes to Michael and Sam, offering to assist in their plan to wipe out the entire coven, including Max, with the aid of the adorably clueless Frog Brothers. 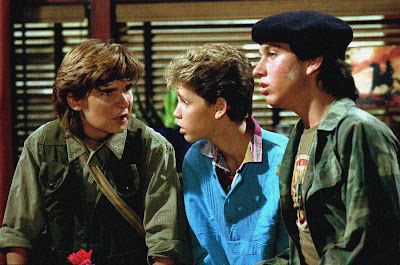 Edgar Frog: I think I should warn you all, when a vampire bites it, it’s never a pretty sight.
Some yell and scream, some go quietly, some explode, some implode,
but all will try to take you with them.
﻿

Later, after Marko, Paul and Dwayne bite the dust in a variety of creatively gruesome ways, Emily joins Michael in hand-to-hand combat against David, the seductive, white-haired vampire meeting his tragic end by being stabbed in the chest with decorative antelope horns. 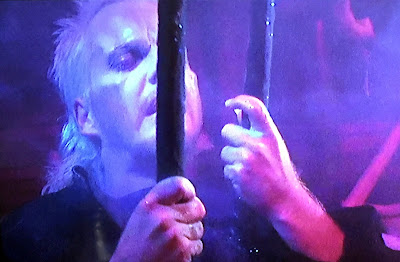 David’s brutal demise at the hands of Emily and Michael.


Then, after Max is destroyed the same way as he is in the movie (thanks to good ol’ Grandpa), Michael reverts back into a human and hugs of celebration go all around. There’s just one more thing, though: Emily. Through tears of relief – the first she’s cried since the night Max turned her – Emily begs Michael to end her misery with a wooden stake through the heart, which he begrudgingly does, after the two share one long, last, lingering kiss. 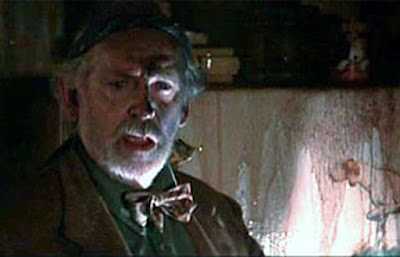 Grandpa: The one thing about living in Santa Carla I never could stomach...
...all the damn vampires.﻿


So, after I showed the story to a few people, and got some great feedback, I started to think, hey, I might actually have a real talent for this whole writing thing. I’ve always dabbled in creative writing but now I was wondering if I could actually make a career out of it, in one way or another. Never, in a million years, did I think that I would, eventually, befriend some of The Lost Boys cast members (and date one of them for a few years) but also have an acting and screenwriting career that has blessed me in so many ways.