My mother wouldn’t let me go see Fast Times at Ridgemont High when it hit theatres, in 1982, because, at 14, I was a bit too young for all the raunchy language and nudity. But I did watch it on TV many years later, just to see what all the fuss was about, and watched it for a second time, last night. 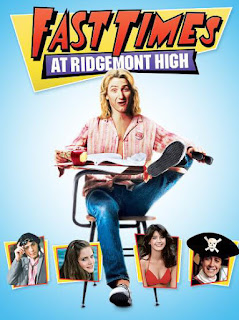 I was quite average, in many respects, during my high school years. Pretty – but not enough to have every guy in school willing to sell their soul to date me. Healthy weight, nice curves, grades in the 60s–70s. I wasn’t a dominating bitch to everyone around me, like some girls were, but I was no angel either. I smoked and drank alcohol, on occasion, swore like a truck driver, skipped school for days at a time and stayed out past curfew on school nights. I was also that “weird” kid, whose hair and clothing style changed from week to week. Someone who was kind and respectful to some teachers, while giving others the finger and telling them to go fuck themselves. The one who was sympathetic to the underdogs who always seemed to get picked on or shoved aside, but who also had a bit of a superiority complex, herself.

So, I smiled as I recognized each and every archetypal representation of myself and my school mates, in all of the characters in this movie. Leads, supporting cast and extras.

We had our petty criminals and burnt out stoners who were always late for class, volatile and self-destructive. We had our steroid addicted, muscle-brained jocks, our perky, pretty cheerleader types who thought the world revolved around them. We had our sensitive, goody-two-shoes arts, band and drama kids – not to be confused with the budding musicians who thought they were the next Jon Bon Jovi or Eddie Van Halen (and treated girls like they were nothing more than soft, warm receptacles for their tiny cocks). We had our rich and privileged preppies, with their Swatch watches, Ocean Pacific golf shirts and Polo cologne, the spikey-haired, black lipstick wearing punk and goth kids, the nerdy types who either thought they were tragically socially awkward or far superior to anyone else around them – including the teachers.

Hearing the great ’80s music in this movie, from Oingo Boingo, Sammy Hagar and The Go-Go’s to Jackson Brown, Led Zeppelin, Tom Petty and The Eagles, and seeing the clothes the characters were wearing; girls dressed like Pat Benatar, Debbie Harry and Olivia Newton John, with roach-clip feathers in their long, flipped back hair, lacy ankle socks with pumps, scrunchy leg warmers over satin leotards. The guys in “statement” T-shirts, leather jackets and jeans so tight you could see their bulging package.