As my 50th birthday quickly approaches (March 27th), I've been reflecting on my life...who I am, what I've done, what I still hope to accomplish before I die...and it's been an interesting journey, to say the least!

I had a shitty childhood. Nothing horrific, mind you. I was never beaten, starved and locked in a closet for a week but, after my father abandoned me to start a new family with someone else when I was ten, virtually every day was a struggle. My birth mother was, and remains, an emotionally stunted high school dropout with no moral or ethical compass. We were always short on cash because she couldn’t hold down a legitimate job, moving my baby sister and I from home to home because she couldn’t pay the rent, forcing me to change schools every few months, which made it impossible for me to forge long-lasting friendships with my peers. Mercilessly bullied by my classmates for being "different" and repeatedly sexually molested by family members and my mother's boyfriend from age 12-18, I ran away from home more times than I can recall, sleeping on park benches and eating out of garbage cans, to escape my hellish home life. Top that off with a breast cancer scare at age 19 that left me with a permanent 4" scar across my right boob, and it's safe to say my youth was just one miserable day after another.

When I was 20, I met and later married a notable figure in the Canadian broadcasting industry. Tall, handsome, charming, intelligent and very funny, Michael would’ve been the husband that every girl dreams of marrying...if it wasn’t for the fact that he had some serious mental health issues. Plagued by anxiety, severe depression, paranoia and a profound lack of self-esteem, this divorced man, ten years my senior, was an absolute nightmare to live with during our 12 years together. I lived in constant fear of his wrath and, while he never once laid a violent hand on me, his Svengali-like manipulations (suggesting, under threat of leaving me – or worse: harming himself – what job I could have, what friends I could have, which family members I could associate with, what clothes or shoes I could wear, which words I was forbidden to utter in his presence etc.) and relentless accusations of impropriety (any time I went grocery shopping with make-up on, he assumed I was sneaking off to go fuck someone) ultimately alienated me from my friends, family and co-workers until he was all that was left in my world. Finally, at age 30, I’d had enough of his psychotic accusations and emotional manipulations, which had all but destroyed my soul, and I gave him the boot.

It took a while to rebuild a life for myself as a single gal living in the big city (Ottawa) but, by 2005, I had become a successful voice-over artist, and forged some great relationships as a publicist, personal assistant and image consultant for several Hollywood celebrities. I also dabbled in acting, screenwriting and television production, interior decorating and set design...I was working 90 to 110 hours a week – sometimes 25 to 30 hours straight – with nothing to eat all day but a handful of cookies. Literally running on fumes as I partied with Sting in London, danced with Robert De Niro in New York, and attended the Oscars and Emmys in L.A. with people who would later leave the event clutching a golden statuette. I had an agent, an entertainment lawyer, a business manager, an office secretary, personal assistant and bodyguard/chauffer on-call for special occasions. I was raking in about $200k per year as the trusted confidant to several Hollywood powerbrokers...and, unknowingly, the hectic lifestyle was killing me. More on that, later.

For many years, I had been working on a multi-media project, called The Black Tower, which I’d been developing for the North American market as a TV show, with a companion webcomic series and video game. Phase One, the webcomic, launched in August, 2008. Though not a financial success because it was free online (a teaser for the TV series), the first issue of The Black Tower was a huge hit in comics/sci-fi geek circles and I suddenly found myself the object of much attention by people who wanted interviews, autographed headshots and printed copies of the webcomic. My email account was inundated with fan mail from people all over the world. It also caught the attention of several actors and writers for Lost, Heroes, Smallville, Supernatural, Buffy, Angel, Stargate: SG1, Battlestar Galactica and other genre shows who wanted on board the project, should I ever manage to sell the TV series rights. 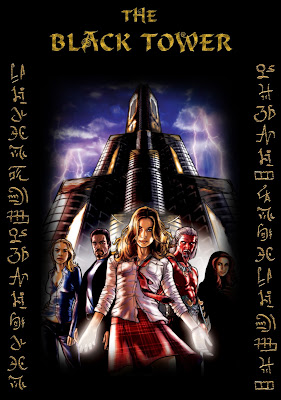 I pitched the project to various production companies all over North America where it got a few nibbles from development executives. But, then, all hell broke loose after the economic crash of 2008, and Hollywood did not escape the carnage unscathed. Networks started laying off its stars, screenwriters and producers in a desperate attempt to stay in the black. Greenlit film projects were suddenly put on hold, and TV pilots that might’ve sold, otherwise, were dismissed as too expensive to produce for the upcoming season. The Black Tower died a slow, agonizing death, along with my dreams for a future as creator/showrunner on a hit TV show.

Meanwhile, in an effort to avoid bankruptcy, many of my clients had to let go of some of their staff. The housekeeper, the nanny, the chef, the personal trainer...and me. One by one, they cut me loose until I was down to my last three non-celebrity clients, making less than $2,000 per month by the end of 2009. My health was also starting to deteriorate. Chronic fatigue, blurred vision, fainting spells, insomnia and dramatic weight loss (60 lbs. in four months). I thought things couldn’t get much worse.

In March of 2010, I took a live-in position as a household manager, personal assistant and nanny for a middle-aged jet-setting couple in Toronto, with a five year-old son. In order to fit all of my things into their 300 sq. ft. nanny’s suite, I had to sell, give away or trash 70% of everything I owned. It was brutal! But, in a way, I was kind of glad to be rid of all that "stuff" and start fresh in a new environment. Unfortunately, by the end of my first week, I realized I’d made a horrible, horrible mistake, as the woman of the house, "Mary", quickly revealed herself to be an immature, selfish, self-indulgent Jewish princess who went out of her way to make everyone around her feel like shit, with her cruel comments and backstabbing accusations. Angry, bitter and ruthless to the core, she repeatedly dug her well-manicured nails deep into my soul, with behaviour so shocking it had me in tears on several occasions. I was so relieved when, two weeks into my new job, I was let go because we discovered that their son was allergic to my two cats, who lived with me in the nanny’s suite. My relief quickly turned to panic, however, when I suddenly realized that, just days before my 42nd birthday, I found myself homeless, unemployed and flat, dead broke.

I moved from temporary home to temporary home, living like a gypsy with what few meagre belongings I had left, after a flood destroyed almost a third of the stuff I had in storage during my brief employment in Hell House. I got a part-time job making $900 per month as an overnight janitor at a health club, while trying desperately to secure employment in the Toronto entertainment industry, which was still suffering the effects of the economic crash. Sadly, everyone who once sought my guidance and opinions on their TV and film projects (I specialized in viral marketing and social media) were no longer returning my phone calls and emails enquiring about job opportunities on the very same projects that I had consulted on just months earlier. By the spring of 2011, I was $42,000 in debt, living in a shitty little 400 sq. ft. basement apartment in Pickering, and working a dead-end, minimum wage job that only exacerbated my ever-declining state of physical and mental health.

Then, along came Dad to my rescue. Happily retired and living alone on Vancouver Island, he invited me to come live with him and start a fresh new life on the west coast, after having filed for bankruptcy and losing my car, my two beloved cats (sickness & old age) and still more personal belongings, which I had to sell in order to eat. With much anticipation, I flew west in late June, 2011, in hope of finding full-time employment in Nanaimo, a safe, clean apartment and a new perspective on my future.

It took a while to settle in and find my groove, and there were a few nasty bumps on the road after I got here, not the least of which was being diagnosed with Type 2 diabetes. That, unfortunately, took about three years to get under control, with pills, insulin, proper diet and exercise. But, now, I can honestly say I’m happier than I have ever been in my entire life. I absolutely love my job, working as a personal assistant for a British family that owns three restaurants on Central Vancouver Island (they treat me like their adopted daughter), I have no other debt beyond monthly rent, cable, hydro and cell phone bills, and I live in a gorgeous apartment just two blocks from the Pacific Ocean. I spend leisurely afternoons reading, writing, sculpting, baking cookies, watching old movies in bed with my two new kitty cats, or taking a stroll along the sandy shores of Nanaimo, chocolate ice cream cone in hand.

I've made some wonderful friends here on the island and, even though I haven't completely let go of my life in the entertainment industry (if a voice-over gig or temp job on a local movie/TV production falls into my lap, I’ll consider taking it), I feel the time has come for me to switch gears in this next phase of my life. Focus more on my artistic side, writing lifestyle magazine articles that I may or may not seek to have published, and creating works of art to sell at craft fairs and galleries, or on the Front Street boardwalk to the thousands of tourists who visit Nanaimo every summer. 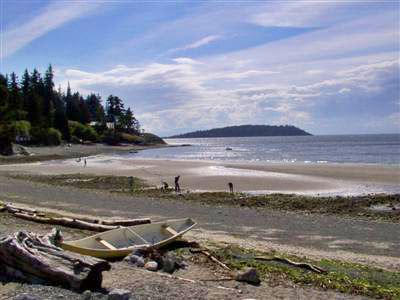